It’s no secret that the history of mankind has a fascination for me. As a boy, I used to make bows and arrows, spears and stone tools, hung out in the large woods behind our house in the German countryside, and read books about Stone Age mammoth hunters of Europe (I won’t mention the loincloth I made of rabbit skins). Now, I work in the field of ancient DNA, in the lucky position to apply my personal passion for the human past through the combined research interests of genetics and archaeology.

This is hard work on a day-to-day basis. Our rewards include publications, when we can share our hard work with others, as was the case this week. This study is the culmination of many years of work, and a real team effort, involving people that share the same passion and with whom I’m grateful to work. This study also touches on another childhood memory. I read up on Romans, Celts and Germans, and I learned that my mother tongue was somehow related to other languages as far away as India, which I thought must be on the other side of the planet. This blew my mind back then, and still does.

I now know that I am one of over three billion people who speak one of the 400 languages and dialects, which belong to the Indo-European language family. Among these are English, Italian, Greek, Armenian, Persian, and Hindi-Urdu. While the relationship between these languages is undisputed and had been recognised for a long time (long before my rabbit loincloths), there is a vivid debate about where this language family actually originated.   In sum, there are two competing views:

a) Indo-European spread with the first farmers from Anatolia/Near East during Neolithic Revolution starting > 9,000 years ago. This revolution also brought agriculture and domesticated animals to Europe. There is genetic evidence for this expansion of farmers, and it is plausible that these guys also spoke the language that would be the source of all Indo-European languages, the so-called Proto (meaning ‘first’) -Indo-European (or PIE).

b) Others argue that this is too early given that nearly all Indo-European languages share similar vocabulary for wheels, vehicles etc. which were not widely used until ~5000-6000 years ago and therefore the origin language must postdate this point. These people link the language spread to mobile cattle herders from the vast grassland in the Eurasian Steppe, which seemed to have these cool gadgets.

Proponents of a) say to b) You have no migration to prove this!
Advocates of b) tell a): No wheels, no words for wheels!
And so it goes…

Genetic data from ancient people won’t tell us what language they spoke but it can reveal information about the movements of people in the past. This makes it possible to trace large events that could also have carried languages into new places. Our project has detailed genetic data of 69 prehistoric Europeans from across Europe, spanning from 8,000 to 3,000 years ago. This data reveals the ancestry of Europe, demonstrating that Europeans carry signs of the original peoples of Europe (the Hunter-Gatherers), the first farmers (from the Neolithic revolution), and a new group of ancestors who arrived later. These patterns are so clear we feel we can contribute something to debate about the spread of Indo languages. We found that:

This third type of ancestry had been hinted at by previous work but it was unclear when it came to Europe. Our large data set, with its high resolution across time and geography, made the answer clear. All individuals younger than 4500 years had this third ancestry. To try and find the home of this third ancestor, we added an ancient steppe pastoralist from the Samara region in Russia into our analysis for comparison. Bingo! Our samples from the Corded Ware culture from 4500 years ago were the earliest and had the most, tracing three quarters (!) of their ancestry to eastern cattle herders that had roamed in the Russian and Ukrainian steppes north of the Black Sea.

These cattle herders were highly mobile, had domesticated horses and oxen-drawn carts, and had expanded eastwards reaching the Carpathian Basin in Hungary. However, this migration from the steppe also meant something else. The sheer number of shared genes made it likely that the Corded Ware people also shared a steppe language. This train of thought sits well with the spread of Indo-European from the steppe (b above). Importantly, it provides a human migration that could have brought the vocabulary that describes a pastoralist economy including inventions (wheels, vehicles) that were not in use when the first farmers arrived. 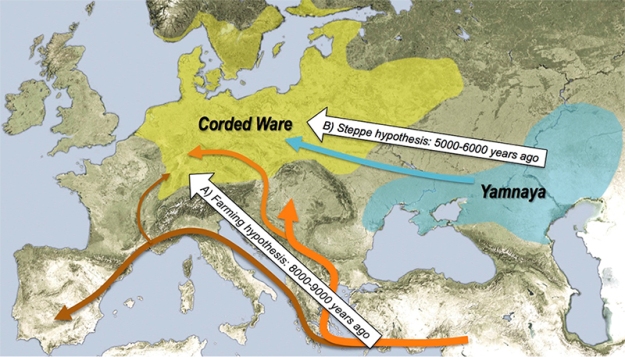 Above: Map depicting the two major hypotheses of the spread of Indo-European languages.

Another way of thinking notes that the cattle herders would also have originally come from farmers in the Near East. Living in the steppes, they developed new technologies and the language to describe them, before introducing both to Europe. This would mean that a variation of the farmer/language theory (a) was correct, albeit with a steppe detour.

Either way, it is clear that the steppe people must have added a piece to the PIE (pun intended!), even if it wasn’t the whole IE family, then at least some of its major branches. As always in science, new insights turn into new questions and we need to know what happened in those other regions, outside Europe, where IE is spoken today. This is not a simple undertaking, but we should remain optimistic. After all, I’m getting closer to answering the questions I had back in the loincloth days.